Curse of the Cliffs

MICHAEL VAN TURNHOUT, husband of the founder and MD of Genealogy.ie, Jillian van Turnhout, has written a number of articles about Genealogy and Local History, which were published in both Irish and North American magazines and which you can download elsewhere on this website. Recently he also tried his hand at a fictional novella, but with a base in real Irish history and set in a real Irish village.

The fictional novella offers crime, Irish history, romance, and Irish folklore. Set in Ireland in 1935, it tells the story of a young woman, Sally, who falls in love and gets married. The newlyweds are ready to start their new lives on a farm called “The Cliffs”, as it is situated on a cliff edge on the Irish river Funshion. 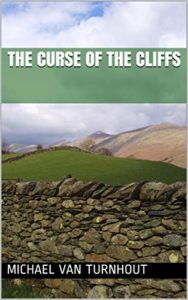 The farm and river are surrounded by history: there are the remains of a castle, a ruined church, an obelisk and it is near an old mill-town. All feature in the book as a background to its story. And all – from farm to town – exist in reality.

But not all is good. Warned of a curse, stories of the past come to haunt Sally. She learns about the gruesome history of the farm, throughout Irish history. But even in the present, all is not what it seems. Is the farm cursed? And why? Is Sally in danger? Or is she just imagining things after recently losing both her parents? Helped by farmhand Stephen Sally discovers the truth.