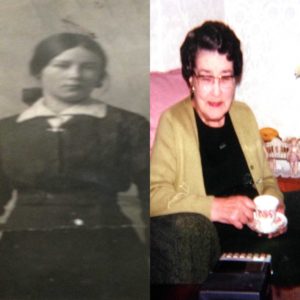 As we approach the Christmas season, we urge you to try and make time to share memories with your family, look at old photos to see if you can uncover any new gems. We take this opportunity to look back to Christmas in Ireland over 100 years ago. Christmas was simpler, but like today, it was also a family affair. We found this gem in a family memoir box, written by Kathleen Hassett in the early 1980s. Her childhood was spent on a small rural farm Knockanean, near Ennis, Co. Clare, Ireland. The pictures show her as a girl and later in life.

I was born in the last few years of the reign of Queen Victoria, so I can say something of Christmas before the First, or Great War. It was a holy day rather than a holiday, but that did not mean we all wore long faces. Schools closed for almost a fortnight, as it does today; that in itself was a holiday; through as always had little tasks to perform – washing up, wiping up, dusting, shopping etc.

Each Christmas season the local grocer gave us a “Christmas Box” of a quarter stone of sugar, 1lb.tea, 1lb. each of currants, raisins and sultanas, and perhaps even half lb. of candied peel. Though the actual goods and the amounts varied from one business to another, the custom of giving Christmas boxes to customers was general, but it came to an end due to rationing during the 1914-18 war and was never renewed.

By Christmas Eve, we were excited – Father Christmas or Santa Claus would come during the night, but we had to be asleep. We hung up a stocking borrowed from an adult or used a pillowcase. We slept soundly and awoke bright and early to see what the great man had brought us. The toe of the stocking was usually filled with sweets, and an apple and an orange took up more room.

Each little girl got a doll usually beautifully dressed; my younger sister, born in 1908, was the first in the family to have a Teddy Bear from Father Christmas. Little boys usually got a game or a ball. Father Christmas was a wise man – if we had a doll, we did not usually get another. Dolly perhaps got a dolls house, or a tea-set, or some doll’s furniture. As we grew older, our gifts also grew older – we got a sewing-set or a book, which we found exciting.

Soon it was time to get washed and dressed and go to Church. The highlight of Christmas morning was to see the Crib where the Holy Child lay sleeping.

Dinner time brought fresh excitement, especially when the Christmas pudding appeared. We had all had to stir it, and we knew that silver 3d pieces and 6s pieces were there, and if one found a silver coin in your portion, you would have a year of good luck. Afterwards, we played games, or read until tea-time after which we were advised to get to bed early to sleep off the excitement of the great day.

At Genealogy.ie, we wish we could give each of you a big hug and hope this article will act as a virtual hug. We would like to wish all of our customers and friends a very Happy Christmas and a Peaceful New Year.

PS: If you are really stuck for a Christmas present, you might consider giving a Genealogy.ie. voucher. Contact us for more information.