Christmas is celebrated in a big way in Ireland, with a large part of the country shutting down between Christmas Eve and New Year’s Day. It used to be even longer in days past: it was celebrated by Catholics until the Feast of Epiphany, sometimes called “Little Christmas” or “Women’s Christmas”, on 6th January!

Long before there were Black Fridays, Ireland had its own version for a while: in the second half of the last century, on the 8th of December, the Feast of the Immaculate Conception, people from all over the country would descend on Dublin for their Christmas shopping. With the spread of shopping centres around the county and the rise of e-commerce, this relatively modern tradition has however mostly died out.

In those days, the 8th also used to be the day that people started decorating their houses. Nowadays, some people start in November, while longer ago houses weren’t decorated until Christmas Eve. 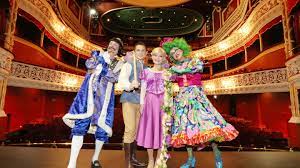 Returning to modern days, in the run-up to Christmas children often go to “Pantos”, a shortening of Pantomine. They are a kind of musical comedy, performed on many stages and in theatres.

Christmas Eve is the day that traditionally people in Ireland use to travel to their families. There are still quite a few people who will put a candle in the window. This was originally done to welcome Mary and Joseph. Former President Robinson placed a candle in the window of the Áras an Uachtaráin – the official residence of the President of Ireland – to remember the Irish diaspora. But we are sure arriving family members appreciate it as well after an often long journey to celebrate Christmas with the family. 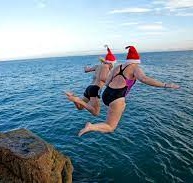 Christmas Masses used to be at midnight on Christmas Eve. Thankfully mass times nowadays are a bit more accommodating.

Some people, and we really mean some, partake in a swim in the sea on Christmas morning. As you can imagine, this is a pretty cold affair. It is mostly done for charity, but also for fun and to keep up the tradition.

On the 25th, people sit down with their families for the Christmas meal, usually starting late afternoon. For many it is not a Christmas dinner without turkey and cooked ham, preferably with carrots, brussels sprouts, and of course mashed potatoes and roasties. And for dessert a Christmas Pudding and/or rich Christmas Cake. In some areas, Cork for example, a portion of spiced beef is also a must. Often the turkey and ham leftovers are still being eaten cold on sandwiches for several days afterwards!

The day after Christmas is called “St. Stephen’s Day” and is an important day in the horse racing calendar. Those not attending, mostly use the day for relaxing.

Less widely celebrated now, but very popular in the past was the “Wren Boys Procession/Wren’s Day/Hunt of the Wren”. A wren is a small bird. If still celebrated now, a fake is used, but in the past, it was a real bird that was hunted, killed, and put on top of a pole or bush and paraded around, with the participants dressed up in all manner of costumes. Whilst going from house to house a song was sung: 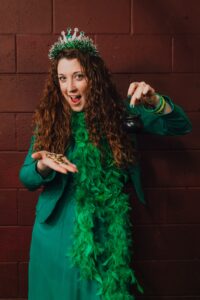 This would later develop in carollers going from door to door, but that has now mostly stopped as well. But you will still hear carollers in shopping streets and centers, still collecting money. But as it is now for charity, hopefully, they get more than pennies.

The end of the Christmas celebrations was traditionally, as mentioned, on 6th January. It was called “Women’s Christmas” because that day the men are supposed to do the work in and around the house, giving the women a chance to meet and chat. In recent years, this tradition has had a bit of a revival with women meeting up for lunches, etc. on this day.