Castle Garden, the previous facility, was in New York itself.  The number of immigrants was rising, which meant a bigger facility was required. But there was also a wish to better contain the immigrants, who often arrived sick and unhealthy.

In 1890, Congress approved a budget of  $75,000 to build America’s first federal immigration station  on Ellis Island.

The size of the Island was doubled to six acres, using fill material from incoming ships’ ballast and from the construction of New York City’s subway tunnels. 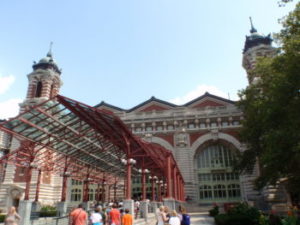 The first building was a three-story wooden structure. It opened on 1st January 1892 and already on that first day, three large ships with 700 immigrants passed through. That year, it processed almost 450,000 immigrants .

A few years later,  on the 15th June 1897, a fire of unknown origin, completely destroyed the building.

Thankfully there was no loss of life reported. On the negative side, it meant that all immigration records going back to 1855 were destroyed.

Between opening and the fire, the station had processed 1.5 million people. 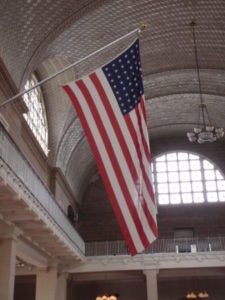 A new station was build, this time from stone. It opened on 17th December 1900. Almost immediately however, it turned out to be too small to handle the enormous numbers of immigrants. It was therefore quickly expanded.

When it closed on 12th November 1954 it has processed 12 million immigrants. Despite the fire, many records are still available and new collections have recently come on line. However, you should be aware that most records only contain basic information.