“Laurels and Ivy, So Green, So Green”

One hundred years ago, in December 1920 in the Freeman’s Journal, Mary Mackay felt it was essential to share her views about a true Irish Christmas. She looked to the west and south of Ireland where they are “jealous and tenacious of their own national customs and celebrations”. “There we have words and phrases lingering through centuries to tell us”. 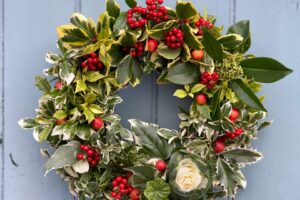 26 December is nowadays called “St Stephen’s Day” in Ireland. In the past – and in some places to this day – it was called “Wren’s Day” or in its Irish form “Lá an Dreoilín”. The tradition consists of “hunting” a fake wren and putting it on top of a decorated pole. “The Wren Boys appear, masked, beribboned, and covered with green and coloured wreaths and garlands, chanting the story of the captured wren, which their leader is supposed to carry attached to the top of an ivied pole”.

In her article, Mary Mackay explains that Christmas Day is scarcely noticed in favour of “Little Christmas” or “Twelfth Day” which was the day the festival was observed before the change of calendar. Little Christmas is marked on 6 January and is more widely known as the Feast of the Epiphany, celebrated after the conclusion of the twelve days of Christmastide. In traditional custom, this was the day of a festival in Ireland. In some parts of Ireland, it was and still called “Nollaig na mBan”, literally “Women’s Christmas” and it is the day the menfolk take down the decorations while women relax or meet their friends socially returning home to a meal cooked for them. It is also the traditional end of the Christmas season and usually the last day of holidays for school children.

The article tells us of the old and purely Irish tradition of candles. On Christmas Eve, “custom says that it must be a man, preferably dark-haired, who will light the first [candle]; and all the other will be lit from that flame. They are supposed to be kept burning all night, though that is seldom found practicable; but it is extremely unlucky if one goes out or is quenched accidentally before its time. Then for Christmas wishes …”.

In more recent times, and I think appropriate now, is to light a candle in your window for the Irish diaspora in the world. This year, we will light our candle and think of all the family histories we have uncovered and the stories we have shared. From all of us in Genealogy.ie we will light our candle to send a warm glow and message of love to all the Irish and friends of Ireland around the world.

We wish you a Merry Christmas and a Happy New Year.