The Destruction of Irish Genealogical Records

“The floor of the repository is piled 10 to 20 feet high with twisted ironwork and debris and entry is impossible . . . In the vaults were deed boxes on iron racks. The racks were evidently softened by the great heat, and the weight of the boxes has bent them and drawn them forward; the lids of the boxes have fallen in, and the contents have been reduced in every case to a little white ash.” 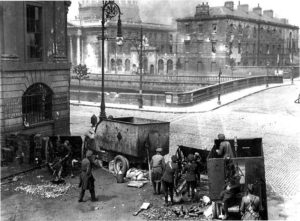 This was a contemporary description of what as left of the Four Courts records after the shelling in 1922 by the Free State troops to end the occupation by the anti-treaty forces.

The Four Courts were the main repository of all public records in those days. The fire caused by the fighting meant a lot of records were lost forever:

However, there is also plenty that survived:

It does mean however that it is just that little more difficult to find your Irish ancestors. But not impossible. You will have to know however where to look and there are also alternative resources. Ever thought about checking the dog licence register?

You should start by looking through the resources that still survive. You can find advice on how to go about this on our website:

And if you do hit the famous brick wall, please feel free to Contact Us