The Irish in Canada

Early immigrants from Ireland were fishermen from Cork, Wexford and Waterford to the island of Newfoundland. This happened in 1536! The numbers were however very small.

Real Irish immigration to Canada only started late in the eighteenth century,  After the independence of the United States, the government of “British North America” wanted to ensure their survival vis-a-vis its much bigger southern neighbor.  It lifted any restrictions on Catholic immigration and even started offering free land to immigrants (with promises of 200 acres per family). This was helped by shipping companies looking for “cargo” for their journeys back from Europe, where they had delivered the foodstuffs that were the main export at that stage. Settlers fitted the bill nicely.

This turned out to be a big success, even before the Great Famine. The Famine did however, as in the United States, swell the numbers enormously.

Most of them settled in Upper Canada (Ontario), Lower Canada (Quebec) and the maritime colonies of Nova Scotia, Prince Edward Island and New Brunswick. Not all remained however, with  many using Canada as a staging post on their way to the United States.

A large number of Irish Catholics arrived in Grosse Isle, an island in Quebec in the St. Lawrence River, which housed the immigration reception station. It would become a source of a tragedy. In 1847 over 80,000 people (of all nationalities)  arrived here, more than double the number of the year before. 70% of these people were Irish. Many were sick after a long voyage on board of a so called “coffin ship”.  These got this name, because it is thought that almost 1 out of every 6 passengers died during or immediately after the trip, mostly of typhus.

Before 1847, these sick were housed for a quarantine period in sheds. However, because of the huge influx of that year, the facility was overwhelmed and soon thousands of people carrying the disease started to arrive in Montreal, spreading it to the local population (including – it is said – the mayor of the city).

For this reason, so-called fever sheds were set up at Windmill Point. To care for, but especially isolate the sick.  In 1847 and 1848 it is estimated that up to 6,000 Irish died here from “ship fever”. Their remains were discovered in 1859 by workers building the Victoria Bridge., who erected the Black Rock memorial in their honor. Its inscription reads:

“To preserve from desecration the remains of 6000 immigrants who died of ship fever A.D.1847-8 this stone is erected by the workmen of Messrs. Peto, Brassey and Betts employed in the construction of the Victoria Bridge A.D.1859.” 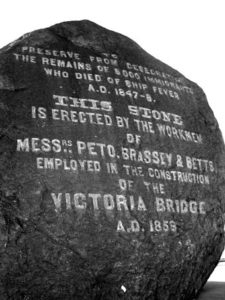