The Irish in the United States

Over 40 million Americans can claim Irish ancestry. Some know their family roots into detail, but many others only have some vague family stories or perhaps even only their name to remind them.

Emigration from Ireland started in earnest in the second half of the seventeenth century. It is thought that of the early colonial settlers around half came from the Irish province of Ulster while the other half came from the other three provinces of Ireland.  Most of these were from families who had only a few generations before emigrated from Scotland and England to the new “plantations”.  According to some sources, only 20,000 of the 250,000 people who emigrated from Ireland to the colonies (i.e. before independence) were Catholics.

These plantations were initiated by the English government as a scheme to tighten their grip on Ireland. Although first conquered centuries before, English power in Ireland was often threatened by a hostile population and its leaders. The plantation schemes simply were about replacing the population by more loyal subjects from England and later Scotland.

The first such schemes date from the middle of the sixteenth century but were not a success. The Ulster scheme, from the start of the seventeenth, attracted more “settlers”.  Still, living among a hostile population did not turn out to be what the newcomers had dreamed about.

And then the new colonies of North America beckoned. Particular popular among these early Irish was New England, but groups also settled in the  the Appalachian Mountain region. 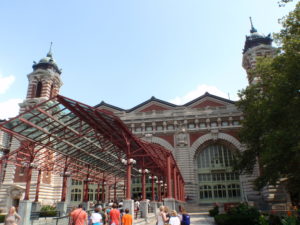 Despite often appalling living conditions, Irish of old Irish ancestry did at this stage not emigrate in large numbers. Emigrating to another continent was not what it is now. It was a complete break from family, culture and language. And the possibility of death on the way. Not something that anyone would undertake without good reason.

Apart from this, emigration of Catholics to the colonies was actually outlawed by the English government. This only changed after independence when the colonies became the United States of America. In 1790, only a few years later, the USA’s Irish immigrant population numbered 447,000 and two-thirds originated from Ulster.

Catholic emigration only started to pick up after 1820. Part of the reason was the buoyant labour market in the USA, with plenty of work in in canal building, lumbering, and civil construction works in the Northeast.

However, as is well known, the pace really picked up as a result of the Great Famine. This famine was not caused by a food shortage. As a matter of fact, Ireland exported food, esp. grain, throughout the famine. The problem was that this grain was produced on large estates, owned by the English landlords, for export to England. Most Irish lived in abject poverty and survived almost completely on a very nutritious staple food: potatoes.

In the 1840’s there was however a recurring and increasingly severe failure of crops due to a potato decease, called blight. This disease caused the potato to rot before it could be harvested.

Massive numbers of Irish started to starve. At first there was no response from the English government, as they believed that they should not interfere with market forces. Only after a huge and worldwide outcry, and many private initiatives to give aid, did the English government belatedly start to help. But even then, it was based on a system where the Irish people were obliged to work for any assistance. This was the time that many desperate Irish emigrated, and also the time of the infamous coffin ships: by some estimated 1 out of every 6 passengers died during or shortly after the voyage.

Most of these immigrants arrived and stayed – at least initially – in the big cities of the Eastern United States.

The population of Ireland is thought to have numbered around 8 million before the Great Famine. This was almost halved by 1900. About a million people died between 1845 and 1849 as a direct result of the famine.  The rest emigrated.

What is not always understood is that these people did not always emigrate during the famine. Many did, with the UK and the USA being the most popular destinations. As a result, Irish communities were formed in these countries. And once these were formed, it became much easier for next generations to follow, which they continued and continue to do.

It is estimated that eight million people emigrated between 1801 and 1921. That is equal to the entire population before the famine! The majority of these – then and now – were between 18 and 30 years old.

As mentioned, the big Eastern cities were the main destinations for the Irish. However,  not all remained in these cities. Countless others were part of the westward expansion. of the United States. They were enticed by tales of gold, and by the increasing opportunities for work and land. Kansas City for example is one city that was built by Irish immigrants and a large number of its population today is of Irish descent.

The Irish were having a huge impact on America as a whole. In 1910, there were more people in New York City of Irish ancestry than Dublin’s whole population, and even today, many  cities still retain a substantial Irish American community.

Want us to help find out about your Irish ancestry? Contact us!