The Irish Government has launched a new online resource for the Decade of Centenaries – it is called Mná 100 (Women 100). The updated website Mna100.ie includes original research with some previously unseen photos and historic documents drawn together in new and innovative ways.

This new resource will reflect on key themes, such as the role of women in advocating for Ireland internationally; the role of women’s organisations during the Campaign for Independence and the Civil War; women in the Oireachtas (Irish Parliament); and the stories of the pioneering women who were trailblazers within their chosen professions.

We recommend the special curated short film for Mná 100 called Toward America. The film looks at the American Committee on Conditions in Ireland and the foundation of the Irish White Cross. The piece is grounded in original research, with a wealth of images from private and public collections in Ireland and the United States. It is exclusively curated for Mná100. 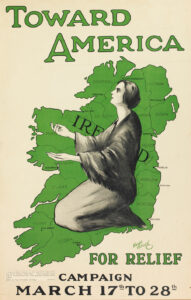 Mná 100 was launched both simultaneously in Ireland and in New York with guest speakers from Glucksman House, NYU, and the Irish Consul General in New York.

In family history, we often find it more difficult to trace female lines. We welcome and encourage all new resources that are working to uncover women in Irish history.