We are going to visit Canada this year. Yes, we will be visiting tourist haunts, do shopping, visit art galleries, etc. But a visit would not be complete if we did not also remember the influx of Irish people into Canada in one of its darkest times.

Although Irish immigration into the USA has traditionally received more attention, many Irish would move to Canada. Both countries were, of course, part of the British Empire until Irish independence. It was therefore much easier for someone in Ireland to move to Canada than it was to emigrate to the USA.

In our last magazine, we wrote about the Jeannie Johnston, a ship that transported people to Canada during the famine. It provided excellent care and is one of the few ships that did not have a single death during its voyages. Unlike many other ships, which caused these ships to be called “coffin ships”.

There were those that perished as a result of shipwrecks. We read a very interesting article on this here.

Most deaths were, however, the result of diseases. The deadly results were often exacerbated because crews would not let the passengers out on the deck, because they were afraid of becoming ill themselves. But of course, after delivering their human cargo into cities like Montreal, these diseases spread among the locals. To protect themselves, the Canadian authorities decided to create a quarantine station, at Grosse Isle, and island in the St. Lawrence river. We intend to visit this island during our visit to Canada.

The quarantining of immigrants would later also happen in the USA, where the Castle Garden Landing Depot, which is located on the island of Manhattan, was replaced by Ellis Island Immigration Station , which was on a separate island of the coast.

Grosse Isle predates this. It actually even predates the Great Famine! This famine has become very notorious and “overshadows” many other calamities. In fact, the quarantine station was created as a result of a major cholera outbreak in 1832. In the famine times of the 1840s, you can add of typhus, ship fever and starvation to the list. The station was however completely inadequate for the enormous numbers arriving as a result of the famine, starting in 1847.

Note: I have borrowed heavily from an article by Michael Quigley, who is a historian for Action Grosse Ile, an Irish Canadian lobby group for the below information. 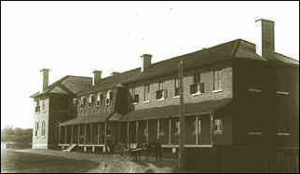 “The Syria was the first ship to arrive [in 1847]. She sailed from Liverpool on 24 March carrying 241 passengers and anchored at Grosse Ile on 15 May. Six days later, 202 passengers from the Syria were ill. The quarantine hospital on the island, built for 150 patients, could barely accommodate 200, and was already filled to capacity.”

In May 1847, 40 ships with 12,500 starving passengers would lie waiting at Grosse Isle to “offload” their passengers. At that stage between 50 and 60 people would die every day!

A medical commission visited the island in June. There were then 21,000 emigrants at Grosse Ile and the death toll had tripled: 150 people were buried that day. They were very critical of the management of the quarantine station but were unable to offer anything beyond instructions to comply with the regulations — which was of course completely impossible: on 20 July 1847 more than 2,500 fever cases were housed in the island’s hospitals!

After this, however, it appears authorities got to grips with the influx. In September, there were still 14,000 people held in quarantine on board of ships at anchor off Grosse Ile. At the end of October, the Grosse Ile quarantine station closed for the winter.

Because the quarantine station was completely overwhelmed, it did not succeed in its intended aim. Many of the Irish immigrants who were “released” into the cities of Quebec and Montreal would later become sick. In these cities too, fever sheds were built, victims hastily segregated. It did not do much for the immigrants who would still die in their thousands.

And it did not protect their hosts either. Clergymen, Catholic priests, stewards, nurses, orderlies, cooks, policemen, and carters were infected and died. And it was not only them: John Mills, the Mayor of Montreal caught the fever at the sheds and died ad did Toronto’s first Catholic bishop, Michael Power.

In 1909 a fifteen-metre tall Celtic cross was erected on the highest point on the island, built by the Ancient Order of Hibernians. 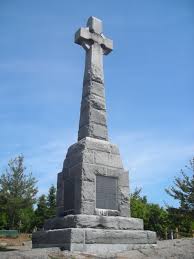 We will come back to the story of Grosse Isle after we have visited it later this year.