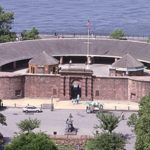 Between 1808 and 1811 a fort was built to help protect New York against invasion. This was not an idle threat, as in 1812 a war broke out between England and the USA, with the former trying to regain possession of its former colonies.

The fort did not however see any action during this war, or at any time after.

The original name of the fort was “West Battery”. In 1815 however, it was decided to rename it “Castle Clinton”, after a popular New York mayor (and not the last politician of that name to rise to high office).

In 1821  the United States Army  decided it no longer needed it. The city of New York leased the property and used it as a place of public entertainment, under the new name of Castle Garden. Officially however, the name is still Castle Clinton.

An ever increasing number of immigrants started to arrive in New York, mostly landing at the docks on the East side of the tip of Manhattan, around South Street.

To cope with this influx, the castle was converted in 1855 to an “Emigrant Landing Depot”. It would fulfill this function until in 1890 the federal government took over and moved the center to the larger and more isolated Ellis Island.

The latter because immigrants were known to carry diseases, which led to epidemics of cholera and smallpox.

When it closed, more than 8 million people had arrived in the United States from via Castle Garden.