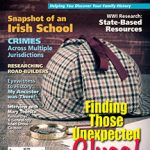 “Your Genealogy Today” is a leading North American genealogy magazine. It is a “how-to” publication, giving tips, tools and advise to family historians about researching their ancestry. It is published by Moorshead Magazines Ltd. . This company also publishes “Internet Genealogy” and “History Magazine”.  Although based in Toronto, Canada, 90% of the circulation is in the USA.

The magazines can be obtained via subscription or via Barnes & Noble and Books-A-Million  in the USA or Chapters book stores in Canada. Alternatively, they can be ordered or downloaded in PDF format from their online store.

The reason why we post about it, is that the September/October issue contains an article from our own Michael van Turnhout. The title of his article is “Snapshot of an Irish School”. It talks about what we can learn about the lives of our ancestors by looking at a typical school in the mid-nineteenth century. If you are interested to learn about your ancestors’ local school, why don’t you Contact Us 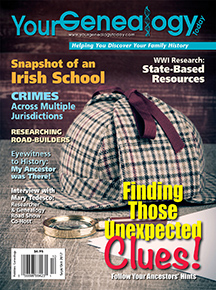 Overview of articles in the September/October issue of “Your Genealogy Today“.

The Name of a Rose: Connecting With the Past
Sue Lisk finds that you can make amazing connections with your ancestors through hints they leave for future generations

Road Overseers, Surveyors of Highways, and Road Juries
David A. Norris looks at how early road-building records might pave the way to new genealogical information

Eyewitness to History: My Ancestor Was There!
Robbie Gorr discovers an ancestor who lived in Tombstone, Arizona during some of the most tumultuous times in Western US history

Genealogy & the Law
Where there is – or isn’t – a will. Judy G. Russell explains what you might find in a probate

The Back Page
Dave Obee says: “Sometimes, it’s hard to see the obvious” 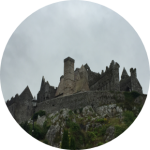 A must see tourism destination if you visit the south of Ireland: The “Rock of Cashel”.

Click on photo to see a larger picture and explanation.

We hope you enjoyed the gallery. Why not have a look at the rest of our website?

Comments Off on Cashel, Co. Tipperary 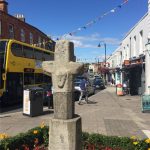 Blackrock is nowadays a suburb of Dublin, but it once was a Town of its own. Up to about 1700, the area where it is located was just an empty bit of coastline, south of Dublin. Strangely, as it was then quite a distance away, it did belong to the City of Dublin. We know this because the Mayor of Dublin, together with his sheriffs, would every three years take a tour of the boundaries of the city. They would end up in modern Blackrock, where the Mayor would ride on his horse into the sea and throw a spear as far as he could: they would claim even the sea, up to where the spear would land. The oldest artifact found in Blackrock is this cross, estimated to be from the 12th Century. Although by no means certain, one theory is that it was a boundary marker. 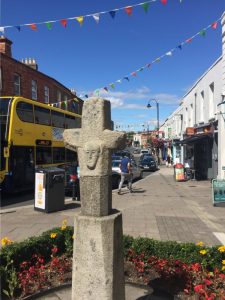 Just south of Blackrock used to be a castle, which was owned by the Byrne family. No trace of it remains, and even its exact location is uncertain. Around this castle, a little village sprung up. This village was originally called Newtown. The problem with this name was that there were many places in Ireland with this name. To distinguish it, it was therefore also called “Newtown Castle Byrne” or “Newtown at the Black Rock.”. It is the latter name in abbreviated form that survived.

The Black Rock in question was a large limestone. Blackrock is at a geological border. North of it, towards Dublin, the ground is made up of gravel on top of limestone. South of it, it is mostly granite. The limestone, over thousands of years, has eroded away and created the plains on which the City of Dublin sits.  The granite is much harder, and has eroded much less. This is why we have the mountains of Wicklow and the beautiful cliffs at Killiney. Blackrock is also mostly on granite, and would therefore be higher above sea level than Dublin. But as it was at the spot where the limestone and granite met, a large piece of limestone sat in between the granite. This limestone, when wet, would be black and would be clearly visible against the light grey and brown of granite and thus form a natural marker. Hence the name. You can see the difference in the picture below (ignore the brick, they are from a later repair of this old wall). 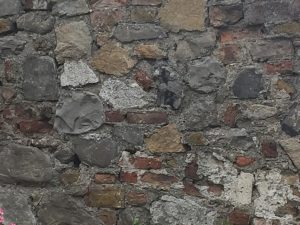 From about 1700, bathing in the sea became popular as a leisure activity. As the Liffey and Dublin Bay nearer to the City of Dublin were heavily polluted (sewerage treatment plants did not exist yet), people traveled a bit further away.  Blackrock, with its cleaner water and attractive views from its elevated position fitted the bill. It became one of the first seaside resorts.

At first it would mainly attract day trippers. Then, some entrepreneurial people built houses and started renting them out to holiday makers.  The very rich would built their own homes. These were often very grand affairs. The grandest of them all was Frescati House, owned by the Duke of Leinster. It was their third house, as they would also own Carton House in Co. Kildare, their main seat where they would spend the summer) and a Town House in Dublin, where they would spend the winter, attending balls and other social occasions. The latter is now home the Irish Dial and Seanad (lower and upper chambers of parliament).  Frescati House was built in 1739 for the family of John Hely Hutchinson, the Provost of Trinity College, but was sold in the 1750’s to the aforementioned Duke of Leinster. Unfortunately it was demolished in the 1980’s, being in a very bad state. Although of a later date, the 1850 Newtown House gives an idea of the splendor of Blackrock’s residences: 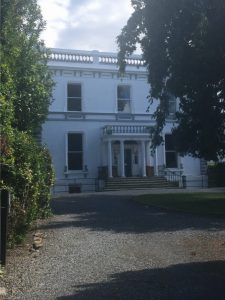 Later in the 18th Century, “promenading” became very popular. This meant walking in a beautifully maintained area, for which an entry fee had to be paid. This way, only people of “status” would get access, and the rich would have a chance to see and be seen by the others of their class. One such promenading area was also built in Blackrock, with the name “Vauxhall Gardens”.  It was not a commercial success, and later became a private residence until in 1873 the Town Council (of which later more) purchased it and turned it into a park.  The park was bigger than the original Vauxhall Gardens: when a railway between Dublin and Dun Laoghaire was constructed (see below), in Blackrock, it sat on top of a man made embankment in the sea, thus creating a “lagoon” type area. This was soon used as the local rubbish dump. When the park was developed, the area has been almost completely filled and it was decided to grass it over and add it to the park. The park itself was a  Victorian affair complete with bandstand. Bands were then very popular, with most organisations (including large companies) having their own bands. 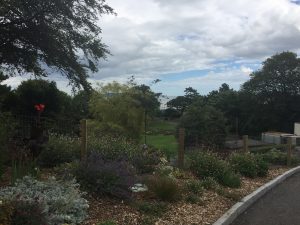 The railway (Dublin & Kingstown Railway) is also worth mentioning: it was the first railway in Ireland, constructed in 1834. In the world, only the Manchester to Liverpool railway is older (1830). The railway connected Dublin to Dun Loaghaire, which was then called Kingstown. There was only one stop in between: Blackrock. The Dublin station – orignally Westland Row, but now called Pearse Station – has been redeveloped in 1981. As the heart of Dun Loaghaire moved over time – as a result of the harbour – it too got a new station. That leaves the Blackrock station as the only original station. It is still in use today. It was designed by a local architect, Mulvaney, and you can see his trademark in it: the recessed doorway with the Ionic columns. 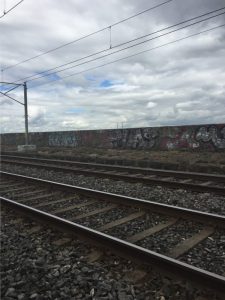 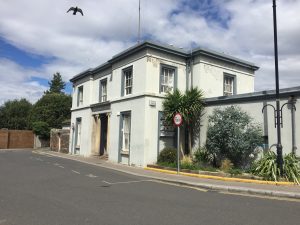 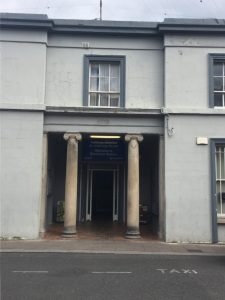 The railway did cause some problems though as it separated the town from the sea, and bathing was still popular. The railway company therefore provided footbridges and bathing areas (men and women separated, as bathing costumes did not exist yet). These were very basic affairs, just a platform and a wall that protected the bathers from wind and their modesty. See the picture below to the left. Towards the end of the 19th Century a private entrepreneur constructed new sea baths, which had changing areas, diving boards, etc. It was purchased in the 1920’s by the government for their “Celtic Games”, essentially a form of Olympic Games for the Celtic Nations. Seating for 1150 people was added. The baths closed in 1987, as a result of cutbacks necessitated by the economic crisis of that decade. In the picture below to the right you can see what is left of it. 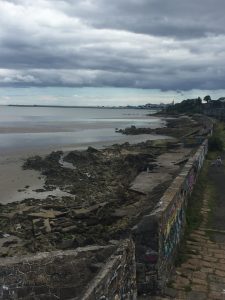 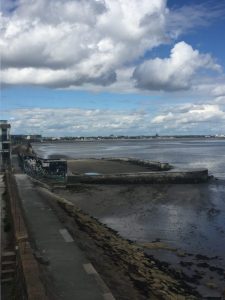 The town was at this stage already booming, and no doubt the railway helped to sustain its growth. Due to a previous reorganization, Blackrock was no longer part of the City of Dublin but of County Dublin. Towns like Blackrock could ask the government to be officially incorporated as Town Councils, by petition. The citizens of Blackrock decided to do so in the 1860’s. This was mainly because people started to demand more of the government: they wanted paved streets and pavements, street lighting, fire stations, etc. It was the role of the Town Council to ensure Blackrock would get these amenities. And as we already saw, they added a Town Park in 1873. To house the administration a City Hall was built, which was extended when the Blackrock Council was made responsible for its rural hinterland (stretching all the way to Stillorgan) as well. In this period we also see the construction of the Catholic St. John the Baptist church (1842-1845) as well as continued building of residential houses, such as Idrone Terrace. 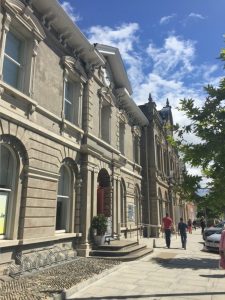 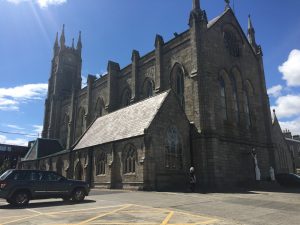 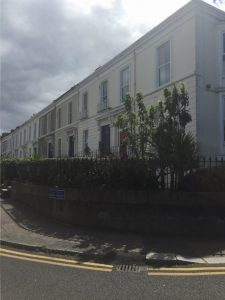 In the 1870’s Dublin is getting its first trams. These only covered small distances, as they were originally horse drawn. Most companies would operate only one line. To get from Dublin to Dun Laoghaire you need to take three different trams. In the picture below, you can see the sheds in which the original trams were kept (until recently the were in use as a car dealership, they are now vacant). The tram companies would be amalgamated in the 1890’s by William Murphy (of 1913 Lockout fame) in his Dublin United Tramways Company. He would also start a program of electrification. The tramway from Dublin via Blackrock to Dun Loaghaire and further to Dalkey was the first to to electric. It was also the last line to be closed down in 1949, when trams were replaced by buses. 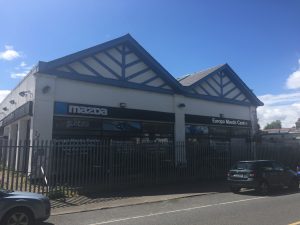 Before that, in 1930, there was also an amalgamation of local councils. One victim of this was Blackrock, which became part of Dun Laoghaire. The local council is now – after several further reorganizations – called Dun Loaghaire County Council. The Blackrock City Hall has been turned into a Library.

Blackrock still has its own identify however, and although no longer a seaside resort, its Main Street with its many shops is still worth a visit. 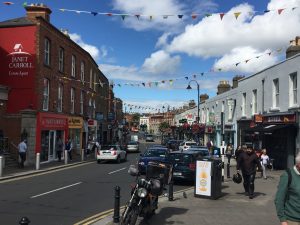 We hope you enjoyed the story of Blackrock. Why not have a look at the rest of our website?

Comments Off on Blackrock, Co. Dublin – a local history