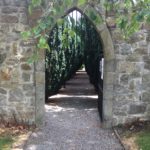 Genealogists are not morbid, but many of us to have a fascination with cemeteries. There are plenty of interesting ones in Dublin, and this is a report on a very old one, which we visited a while back: Old Carrickbrennan Graveyard, Monkstown, Dublin. We believe it has an interesting story to tell!

According to Parish history, the history of Monkstown stretches back to Viking times. A monastery at Holmpatrick, Skerries was sacked by the Danes in 798 AD. Some monks fled and established a new monastery in what is now the old cemetery at Carrickbrennan in Monkstown. We don’t know however if this story is truth or fiction. There are ruins of an old church at the graveyard, but these are of later origin: a church dedicated to St. Mochanna was build here in 1668. It is said, however, that this church was built on the ruins of an older.

We are on a more firm footing when the area was granted to the Order of the Cistercians, who build Monkstown Castle around 1250 AD, just opposite the cemetery. This castle still exists, but only as a ruin. This picture is how it looks now.

Like all other church properties, during Henry VIII’s reformation, the abbey was confiscated and sold off in 1545. The new owner was  Sir John Travers who is buried in the graveyard.

The 1668 church became too small and ruinous around 1777. (The remains are still there, see photo). Thus, a new church for the protestant Church of Ireland was built in Monkstown village, a short distance away from the castle and graveyard. Construction started in 1785.  In 1861 a start was made with the construction of a new Catholic Church, dedicated to St. Patrick, also in the village.

The old graveyard at Carrickbrennen continued in use, however. In 1874 it was closed due to fears of cholera, but it was subsequently re-opened and burials took place until the middle of the last century.

As the cemetery ran out of space a long time ago, graves were put on top of other graves. That is why the ground level is much higher on the western side; a stream on the eastern side prevented the practice there!

Some remarkable people that are buried here are:

On 19 November 1807 the ‘Rochdale’ sank and 265 people perished. Many of the were buried in Carrickbrennan, as it was close to the sea.

Joseph Holt He was born of Protestant Cromwellian parents but nevertheless joined the United Irishmen. He became one of the leaders of the 1798 rebellion in Wicklow and Wexford and was transported to Australia after he was captured. He was however allowed to return and died in Ireland in 1814.

During a huge storm in 1861, twelve ships were trying to make their way to shore in Kingstown as Dun Loaghaire was then known. Several of them got into trouble. Captain Boyd and his crew went out on the rescue vessel ‘Ajax‘ but all of them perished in the effort. The crew is buried at Carrickbrennan, but the captain was never found. Instead, a monument was erected.

One other thing of notice is the little guardhouse. This was necessary because in the 19th century many cemeteries suffered from the theft of corpses, which were sold to medical schools for examination! This was also the reason why some graves have railings surrounding them.

In the second half of the 20th century the graveyard fell into decay but in 1985 it was cleaned up. Now, the county council organises tours of the cemetery every summer.

The volunteers from ‘Ireland Genealogy Projects & Archives have transcribed 30 of the gravestones. These can be found here.

Comments Off on Old Carrickbrennan Graveyard