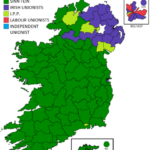 This week we had both local and European elections in Ireland. Fine Gael, Fianna Fail and Labour (the traditional parties) held their own. Sinn Fein did badly and the Green Party did exceptionally well.

So who are these parties, with their strange names? Irish parties defy the traditional stereotyping of “right”, “left”, “liberal”, “Catholic”, etc. Here is a very short and high level overview.

The oldest party in Ireland is the Labour Party. It is a social-democratic political party. (Communism never really caught on in Ireland). Founded in 1912 in Clonmel, County Tipperary, by James Larkin, James Connolly, and William X. O’Brien as the political wing of the Irish Trades Union Congress. In those days – and ever after – it was overshadowed by the national parties, which strived for political autonomy or independence. Labour has been traditionally the third largest party in Ireland, although this position has been challenged in the last years.

Sinn Fein is not a party – it is multiple parties! The orginal Sinn Fein was founded in 1905 by Arthur Griffith. It was subsequently heavily infiltrated by the Irish Republic Brotherhood and became a vehicle for its struggle for independence. In the 1918 election (then still part of the UK general election) it caused a major upset by beating the up to then dominating Irish Parliamentary Party led by John Dillon. The latter had supported the UK World War I effort by calling for Irish men to volunteer for service. The results were devastating as the picture shows: 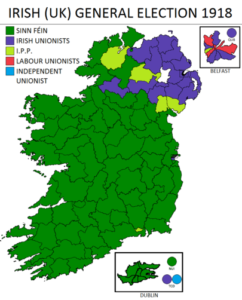 After the War of Independence Sinn Fein broke in two: the followers of Eamon de Valera, who had opposed the Treaty with the UK, eventually formed Fianna Fail. After a short period in opposition, it won the election after the 1929 financial crash. Although it did spend some short periods in opposition, the party would be the party of government until 2011. In that year, another financial crash ended this period of dominance and it is now neck and neck with Fine Gael.

This party was also an offshoot of Sinn Fein. Its main component, Cumann na nGaedheal, was formed after the Civil War by the followers of Michael Collins, representing the pro-Treaty side. After its defeat in 1932 it merged with two other parties, to better compete with the Fianna Fail juggernaut. These parties were the National Centre Party (representing mostly farmers) and the National Guard (popularly known as the “Blueshirts”, whose leader turned out to be a fascist and was therefore quickly deposed).

The party currently known as Sinn Fein has its roots in Northern Ireland. Here, discrimination against Catholics boiled over from the 1960’s, leading to a bloody war of terror. This was not ended until 1998, when the Good Friday Agreement was signed. This Sinn Fein has always had a presence in the Republic of Ireland as well, but it was only after it forsook violence, it became a large force in politics. Despite its heavy losses in this election, it is still the third most popular party in Ireland.

Comments Off on Elections