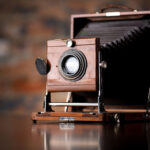 From “Say Prunes” to “Say Cheese”

The creation of permanent images began with Thomas Wedgewood in 1790, but the earliest known camera image belongs to French inventor Joseph Nicéphore Niépce. In the late 1830s in France, Joseph used a portable camera to expose a pewter plate coated with bitumen to light, so recording images for the first time. Together with Louis Daguerre he experimented using different materials (copper, silver, chemicals) and their camera became (relatively speaking) popular. But it was an expensive hobby and the “film” needed to be exposed to light for 15 minutes!

Further developments followed with “wet plates” in the 1850s and “dry plates” in the 1870s. In the 1880s a George Eastman started his company in the US, called Kodak and he made the first camera that was accessible to a much larger audience, in other words, the middle classes. 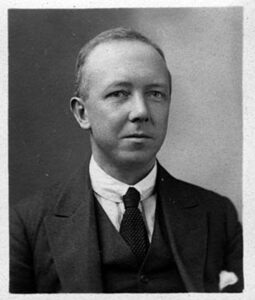 And that included John J. Clarke, who came to Dublin from his Castleblayney, Co. Monaghan home to study medicine at the Royal University. During his time there, 1897 to 1904, he took many pictures. Most of them in and around the Grafton Street and St Stephen’s Green area, but also Portobello, Kingstown (Dún Laoghaire today), and Bray. What is remarkable is that he took pictures of everyday people as they were going about their business, not posing. This allowed him to capture real-life scenes from the daily lives of Dublin’s men, women, and children. And that, in turn, gives us a wonderful insight into the Dublin some of our ancestors would have lived in.

A large number of photographs survived and were donated by his family to the NLI. You can see most of them on the NLI website, by clicking the logo below.

In the late 19th century, different aesthetic and behavioural norms required keeping the mouth small, which led to photographers using “say prunes”. By the mid-1940’s, smiles became the norm which led to the introduction of “say cheese”. 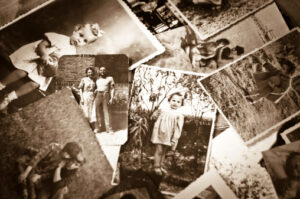 Why not dig out your family photos and try to see if you can date them and name who is in the photo? If you are having difficulty dating them, why not share online and ask other family historians to use their expertise along with your knowledge of your family. We have witnessed so many puzzles by crowdsourcing the answer online.

Comments Off on From “Say Prunes” to “Say Cheese”