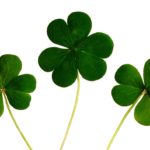 Although there are undoubtedly more symbols of Ireland, we will tell you a little more about five of them. The official one is the harp. The shamrock is probably the most used. We also chose St. Patrick, Ireland’s patron saint. The Irish flag has to be one of them. And finally, the Irish Anthem.

Ireland has the distinction of being the only nation to have a musical instrument as a national emblem. The Harp is exclusively an emblem of the State, both at home and abroad. It is used by Government Departments and Offices, as in the example below taken from gov.ie

The Harp was first recorded as the arms of Ireland in medieval times. It is depicted as such alongside the coats of arms of a dozen or more medieval European kingdoms on a single folio of the Wijnbergen roll of arms (a Flemish roll of arms) compiled about 1270. The model for the current standard representation of the heraldic Harp is the 14th century harp now preserved in the Museum of Trinity College Dublin, popularly known as the Brian Boru or Brian Borumha Harp.

The State coat of arms is a gold Harp with silver strings on an azure field. This is adapted in flag form as the Presidential Standard, which is flown at the President’s residence, Áras an Uachtaráin. The Government, its agencies and its representatives at home and abroad, also use the Harp as the ordinary emblem of the State. It is the principal element of the seals of the office of President and all Government Ministers. The Harp is also found on the obverse of Euro coins minted in Ireland.

St. Patrick is Ireland’s patron saint. He lived from ca. 385 to ca. 465 AD. He was born in Roman Britain, apparently in a well-to-do family. This did not protect him from being kidnapped by Irish marauders who sold him into slavery in Ireland. He managed to escape and return to his homeland, where he became a priest. It was in this role he returned to Ireland, this time to convert the then still pagan Irish to Christianity. 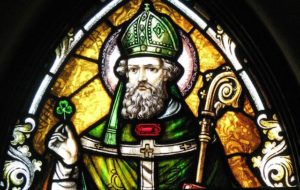 The parade in New York City is one of the biggest parades on New York’s calendar. It has been going since 1762 (although initially it was a gathering and not a parade).

And of course people drink and eat green food, fountains spout green water and landmarks “go green”. In 2017 a record 278 iconic landmarks and sites in 44 countries were turning green for St Patrick’s Day.

In Ireland St. Patrick’s Day has been turned into a 5-day festival and it is an excellent excuse to visit the beautiful country of your forebears.

Tradition holds that St Patrick used the shamrock, a green trefoil, when preaching the Christian gospel in Ireland to explain the concept of the Trinity. The first records of it being used as a badge on St Patrick’s Day date from the 17th Century. Today the shamrock is also used extensively as a badge by Irish sports teams and, to a lesser extent as a component of the logos of some Irish State organisations and companies, both semi-State and private. It is also displayed on the uniforms of Irish troops serving abroad. 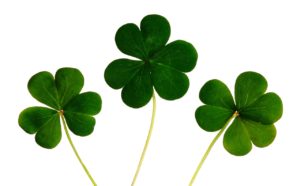 The flag was first introduced by Thomas Francis Meagher in 1848 who based it on the French tricolour. However, it was not until after the Easter Rising of 1916, when it was raised above the General Post Office in Dublin, that the tricolour came to be regarded as the national flag. The flag was adopted in 1919 by the Irish Republic during its war of independence and subsequently by the Irish Free State. It was given constitutional status under the 1937 Constitution, which established the Republic of Ireland.

The green section in the flag symbolises the older majority Gaelic tradition of Ireland, made up mainly of Roman Catholics. The orange represents the mainly Protestant minority. The white in the centre signifies a lasting truce between the two cultures and living together in peace. 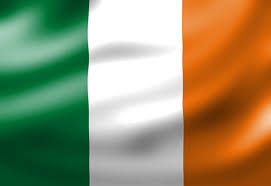 Amhrán na bhFiann or The Soldier’s Song is the national anthem of the Republic of Ireland. The anthem was written in English by Peadar Kearney in 1907, and the Irish lyrics were written by Liam Ó Rinn. The song became the official state anthem in 1926.

The song is regarded by some nationalists as the national anthem of the whole of Ireland, and it is therefore sung, for example, at Gaelic Athletic Association matches held anywhere on the island. The anthem consists of 3 verses and a chorus but generally, only the chorus is sung.

Some Unionists, however, reject this use of Amhrán na bhFiann, and at international games played by teams that represent both the Republic of Ireland and Northern Ireland the song Ireland’s Call is sung instead of, or as well as, Amhrán na bhFiann.


Comments Off on Symbols of Ireland