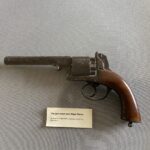 In the nineteenth century, most land in Ireland was owned by a small elite of – mostly – Protestant landlords. They would rent out their land to tenants or would have large estates cultivating land directly (the “Demesne”). Often it was a combination of the two. Some landlords would live on their estate, but others would not, leaving the management to middlemen. It was also not uncommon for landlords to own multiple estates. The Irish estates were an investment, run to provide a return for their owners. However, many estates had ceased to be profitable even before the famine of 1845 – 1849. The famine threatened their viability even further, as many tenants could no longer afford to pay rent. The famine afforded however also an economic opportunity, of which more later.

But let’s step back in time a bit further. Even before the famine, poverty was widespread in Ireland. It had 8 million inhabitants (today, 170 years later, the number is 6 million) and many Irish had to compete for work as landless labourers. Others would be tenants, but the growing population meant that many of their holdings had been subdivided into smaller and smaller plots of lands with each generation. For a lot of Irish people, the potato was their only source of food, as it was nutritious and cheap. Some would be able to afford bread and only a few meat. The “Board of Works” had been established in 1831 to deal with this poverty, by offering work to the unemployed on public works. 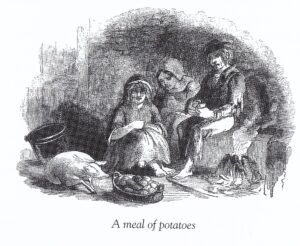 The famine was not caused because there was no food. As a matter of fact, Ireland still exported grain throughout the famine years of 1845-1849. The cause was a potato disease, called “blight”, making them inedible. The potato shortage also pushed the prices of other foods up. As a consequence, most simply could not afford any food anymore. Unfortunately, the “Board of Works” was completely overwhelmed, and by 1846 its failure was widely accepted. 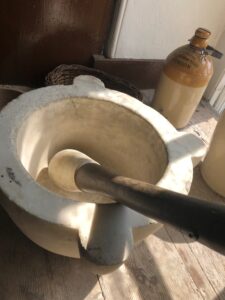 An attempt at relief for the Irish poor was the purchase and sale of cheap grain. The budget was £100,000, or about £12 million in today’s money. To maximise the amount of grain, so-called “pigs-grain” (it was deemed only suitable as animal feed in India, where it came from) was bought. It required three times the amount of labour to turn it into usable flour, using heavy-duty utensils, as shown in the pictures below.

But Trevelyan, who was in charge of emergency food supplies in Ireland during the famine, advocated a policy of effectively withholding relief and allowing market forces to take their course. As the importing and selling of cheap grain by the government was deemed to be distorting the proper working of the free market, it was discontinued in 1847. 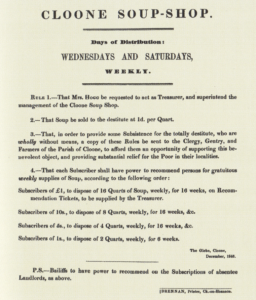 Private relief efforts did not fare much better. Best known of these efforts are the “Soup Kitchens”, where cheap soup was sold. However:

“Nicholas Soyer was a French Chef at the Reform Club during the famine. The soup he devised for the victims of the famine was pronounced excellent by members of high society who visited his Model Soup Kitchen in Dublin. However, it was widely attacked for its lack of real nutritional value. One meal of Soyer’s soup only provided one-tenth of the necessary daily intake of calories.”

The Quakers – who were heavily involved the running of soup kitchens – concluded in the end that without fundamental reform, their attempts were futile.

Which left the local Unions running Workhouses. They were also completely swamped by the famine. The authorities responded by increasing their number and expanding the existing ones. The problem was that they were financed by contributions made by landlords, based on the number of poor tenants they had.

This led to the next phase in the development of the famine. Landlords now had an incentive to get rid of their poor tenants, as well as an excuse (as the Unions were supposed to look after the evicted tenants).

Charles Trevelyan, Secretary of the Treasury, in The Times on 12 October 1847:

“.. the change from an idle barbarous isolated potato cultivation, to a corn cultivation, which enforces industry, binds together employer and employed in mutually beneficial relations, and, requiring capital and skill for its successful prosecution, suppose the existence of a class of yeomanry who have an interest in preserving the good order of society, is proceeding as fast as can reasonably be expected.”

As per the statement above, not only would the eviction of tenants reduce the taxes estates had to pay, but it also offered estates a much more profitably future: many estates were inefficient and badly managed before the famine, with many small sub-holdings. Switching to the growing of grain and the rearing of cattle on large farms was a much better economic proposition. And this required getting rid of the small plots and a lot fewer tenants.

Strokestown was an estate of about 11,000 acres and had its own village attached to it. It was owned by the Mahon family. Major Denis Mahon had inherited it in 1845, just when the famine started. The estate was not in a good position: a previous member of the family had run up debts by significantly enlarging the mansion. He was followed by his bother who was mad; and after that, there were 10 years of legal cases to determine who would inherit. For all of this time, it had been badly managed. 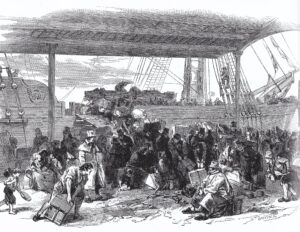 To rescue his estate, Major Denis needed to reform, which meant getting rid of his tenants. Like other estates, Strokestown did offer incentives to tenants to emigrate, including forgiveness of debt and payment of passage. About a thousand Strokestown residents would take up the offer. But the ships the estate chartered did justice to the name “coffin ships”, with over a third of their human cargo not surviving the trip.

And it was nowhere enough for the heavily indebted estate: by late 1847 Strokesdown had become a byword for mass evictions. Strictly speaking, the estate could only evict tenants from their land, not their house. But the landlord also controlled who would be registered for relief with the Unions. And the condition invariable was that the tenants would leave their house as well. Which would subsequently be demolished to prevent them from being re-occupied. 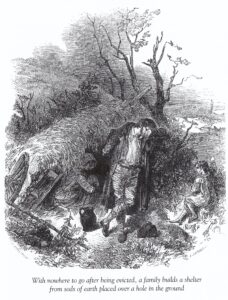 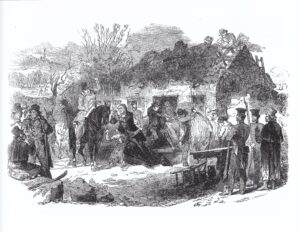 This obviously created tensions. Priests in the Catholic Church were often accused of inciting violence and disobedience, and the local priest in Strokestown was accused of having a role in what was to follow. Most priests would preach obedience to law though, so it is more than likely that a “secret society” of disgruntled locals was responsible for the shooting dead of the landlord of Strokestown: on 2 November 1847 the patriarch of the family, Major Dennis Mahon was assassinated. It is this event that made him famous, as he was the first landlord to be killed. Other assassinations would follow and soon almost every landlord would fear for their lives. Quite a few decided to leave Ireland.

The estate did survive, however. The last member of the Mahon family to live on the estate, Mrs. Olive Hales Pakenham Mahon, moved to a nursing home in England only in 1981, at the age of eighty-seven.

She had already sold the estate in 1979 to a group of local businessmen. They started a much-needed restoration; it was in a very bad state of repair as Olive Mahon had run out of money. A consequence of the latter is that a lot of the features and fabrics are original, as there never had been money for replacements. This did not include the paintings, as they had been sold off a long time ago to generate some income. But it does include a beautiful kitchen that is 200 years old. The gallery below gives you an impression.

The new owners did find a large collection of estate and family papers which formed the basis of the development of the National Famine Museum on the premises of the house. You can visit the museum, as well as the house and its walled garden. For more information, click here.